Messing around with Hex Kit and the Highland Paranormal Society images for Hex Kit. Instead of doing a traditional hex crawl, I ended up doing a faction based map with a bunch of little hooks for border tensions.

Check out the Highland Paranormal Society Patreon here for cool stuff like the towers in this hex map.

Shout out to Nate Treme for the public domain snail and temple. Check out the Highland Paranormal Society Patreon here. It’s the best.

Finishing up a bunch of old half-finished projects I’ve got sitting in Affinity Publisher now that I’ve found some inspiration. Turned this old isometric map into a little annoying time-loop adventure for The Black Hack. This one could seriously frustrate your players, be sure to check in with them here and there. If they are getting tired or bored of the resets, then do some hand waving and get to one of the epic boss battles.

To celebrate reaching 200 backers for the Characters Kickstarter we are pleased to introduce to you a half dozen of the one hundred and one characters available at your fingertips in the Fish in the Pot Characters Collection. 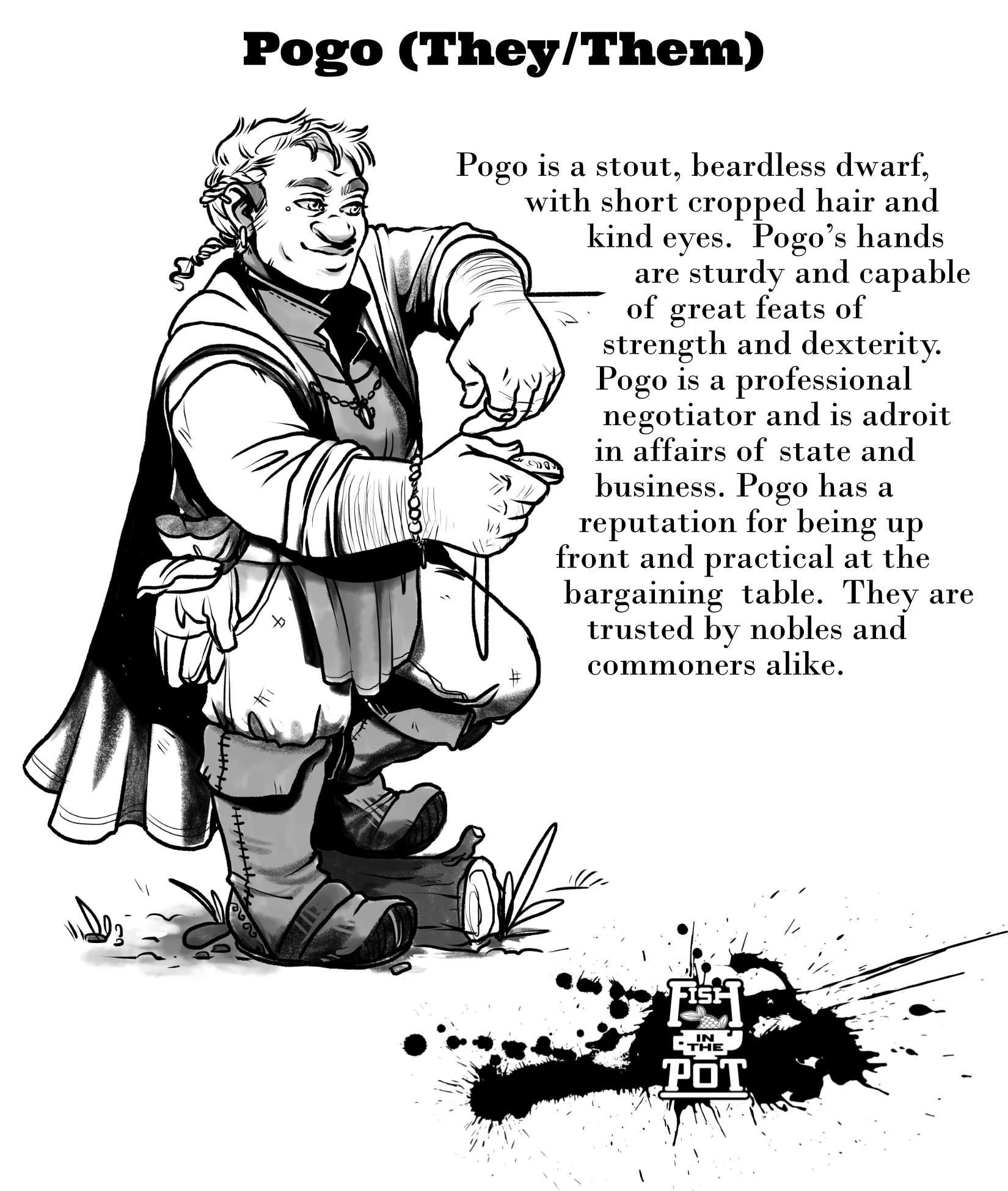 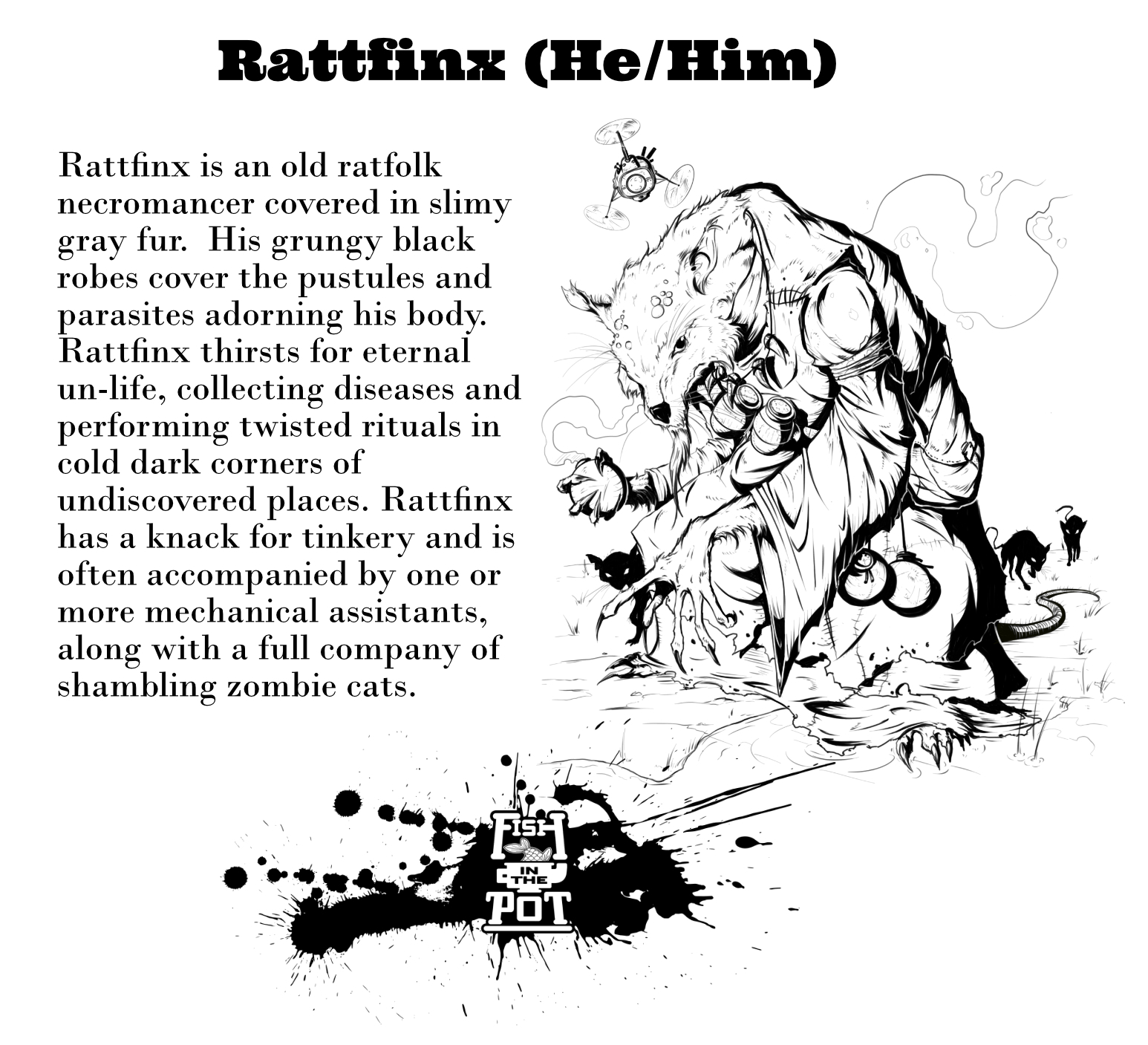 Fooling around with some cool Black Hack stuff I found on the internet.

Get a blank Character Sheet HERE. Get the Dwarf and Elf race-as-class HERE. 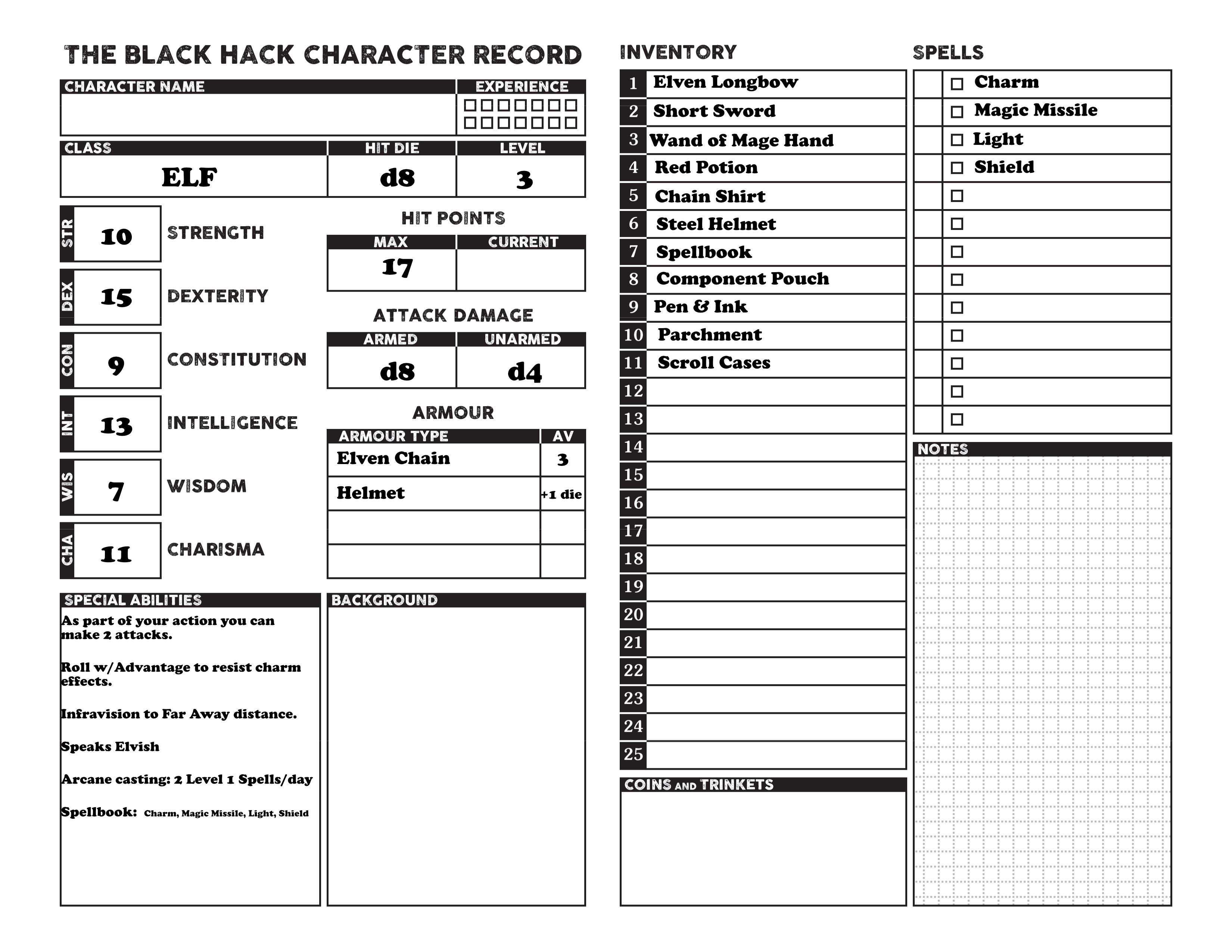 The Fish in the Pot One Page Dungeon Collection is off to the printer and will be made available to the dice-rolling public in mere weeks. Given the impending arrival of our treasure trove of simple TTRPG oddities, it seemed a good time to reflect on the One-Page Dungeon as a tool for the table, and to perhaps offer a bit of advice on how to wring every last drop of fun out of these shortest of adventure templates.

Five Rooms and a Purpose

Designing a Five Room Dungeon begins with understanding the function of each of the five rooms. The rooms are:

The Entrance is the first room of the dungeon explored by the Player Characters.  It is often guarded or trapped. It will give clues as to themes and motifs that are likely to be experienced throughout the dungeon.

The Puzzle is either an actual puzzle to solve or a roleplaying exercise for the players (Fish in the Pot tends to avoid the former in favor of the latter). This room provides further details about the ecology, history, and philosophy of the dungeon while giving your players an opportunity to have their characters chew on some of the scenery.

The Trick is also sometimes referred to as the Setback. This room is an opportunity to spring a trap or pull “the ol’ switcharoo” on the players. This is the room with the mimic, the cursed gemstones, or the poisoned ale. Often the Trick will result in either an additional roleplaying exercise or additional combat.

The Battle is also sometimes referred to as the Climax. This room is where the protagonist meets the antagonist and initiative is rolled. It is important to remember to keep the narrative alive in this room, as there is a natural tendency for big battles to  devolve into simple acts of dice rolling and task completion. Have the villain monologue about their grand plans, or describe the sights and smells of the strange gibbering beast set to devour the heroes.

The Reward is the room with the treasure chest, the magic item, or the troll hoard. Your players worked hard to maneuver through the Entrance, the Puzzle, the Trick, and the Battle and ought to be rewarded. There is also an opportunity in this room to have another Trick. A classic “the princess is in another castle” or “you haven’t even seen my final form” scenario will often work in the Reward room. That said, some caution is in order here, as too many false finishes may win you some serious side-eye from players growing weary of your increasingly stale antics.

These rooms can technically appear in any order, though it is often wise to begin with the Entrance and end with the Reward. These room styles appear throughout many of the Fish in the Pot One Page Dungeons, but often with several variations.

The Character of the Thing

The dungeon is a character you introduce to your players one room at a time. Your players will slowly get to know your dungeon as they discover its secrets and uncover its traps. Every time you present a challenge to your players you have an opportunity to make exciting memories with them. The character of your dungeon is often the difference between a fun but forgettable afternoon diversion and an epic evening of adventure long remembered.

Fish in the Pot One Page Dungeons tend to focus in on a theme or an idea and then explore that theme or idea over the course of a five (or four or six) room dungeon. The dungeons are not fashioned via a Five Room template, but nearly all of the rooms in all of the dungeons can be defined as either an Entrance, a Puzzle, a Trick, a Battle, or a Reward. What is important is that the initial theme or idea is the focus and that all of the various rooms work together to support the theme. What emerges from this exploration is a small dungeon with big character.

In exploring the central idea, the Fish in the Pot dungeons leave a lot off of the page. Let’s face it, there isn’t much room on the page anyway so we need to make the most of it. A Fish in the Pot One Page Dungeon will often not present read-aloud text, detailed room descriptions, intricate back stories, reasons for the PCs to be there, or other trappings and details external to the central idea or theme of the dungeon. This means a couple of things.

First, the Gamemaster running a Fish in the Pot One Page Dungeon will have a bit of work to do. The GM will need to do a bit of dungeon-dressing, filling in details about some of the sights and sounds in the various rooms, describing the floors, lighting, walls, and ceiling, and generally filling the dungeon up with stuff to make it feel like a “real” place in a shared fantasy experience.  Also, the GM will need to be prepared to think on their feet to respond to questions the players will inevitably ask that are not covered by the written materials. The GM is encouraged to improvise as much detail as they feel comfortable with in responding to such questions. Having fun and letting your imagination run wild will never break a Fish in the Pot One Page Dungeon, and even if you think it will, then just remember that the only canon that really matters is the Table Canon and lean right into whatever gonzo thing that is transpiring.

Ultimately the goal of these One Page Dungeons is to fuel your imagination as a creator. Take the ideas in these small, quirky dungeons and make them your own. Fit them into your existing worlds. Make the rewards personal to your players’ characters. Rip the guts out of the entire collection and make something completely new and different. In confining ideas into five rooms on a single page, a lot of the detail present in many other types of table top adventure books is just not available in a Fish in the Pot One Page Dungeon. This is not a flaw in the design. It is a feature. Take the reigns and fill in the details. Build upon the quirky character of the dungeon and explore the idea presented. Use the encounters along with your players’ ideas to make truly memorable experiences.

The new and refreshed version of Warriors of Eternity is now LIVE over on the Fish in the Pot itch page.

New art, new GM-facing materials, a page full of tables, revisions, errata, there are so many reasons to download Warriors of Eternity QST 1.2 today!